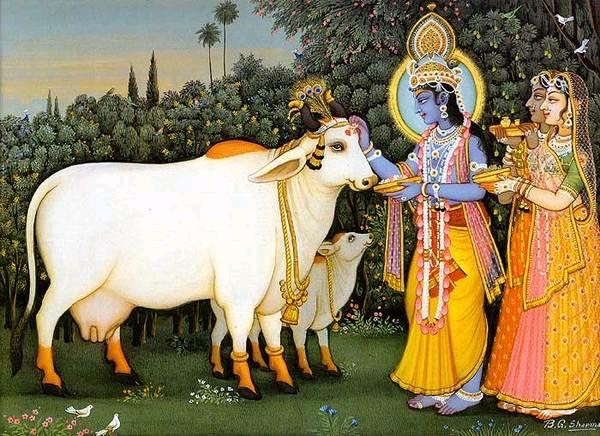 Cows are discussed in detail in our scriptures. Here are some of the quotes that glorifies the cow and cow protection!

Oh Cows! With your milk and ghee you make the physically weak strong, and nurture the sick to health. With your sacred utterances, you chastise our homes. Your glory is discussed in gatherings.

The Gods and men live on cow products. Till the Sun shines, the universe will have Cows. The whole universe depends on the support of cow.

Do not hesitate to consume cow urine and cow dung – they are sacred. But one should never eat the cow meat. A person becomes stronger by consuming Panchagavya.

Donation of cows is superior to all others. Cows are supreme and sacred.

In this verse Lord Krishna reveals that among cows He is manifested as the kamadhuk meaning kamadhenu the original wish fulfilling cows known as the surabhi cows. Just who and what are the surabhi cows and how the surabhi cows attained such an elevated and exalted position that they are able to represent a portion of the energy of the supreme Lord Krishna will be revealed in the following information given in the Anusasana Parva of the Mahabharata by Krishna Dvaipayana Vyasa.

The surabhi cow descended from the spiritual worlds and manifested herself in the heavenly spheres from the aroma of celestial nectar for the benefit of all created beings. The direct descendants of the surabhi cows are the sacred cows from the continent India which are uniquely distinguished the same as the surabhi by the beautiful hump on their backs and the wonderfully soft folds of skin under their necks. Since all cows in existence in the world today are factual descendants of the sacred cows of India they are all holy as well and should always be lovingly cared for and protected with the highest esteem and greatest respect. One should never cause harm to cows in any way even in a dream and one should never ever even think of eating the flesh of cows as there is no action more sinful in all of creation then cow killing.

Cows are the mothers of all creatures. Cows are verily the mothers of the 33 crores of demigods that administrate creation in the material existence throughout all the universes. Cows are the goddesses of the gods and the refuge of all auspiciousness. Cows bestow every kind of happiness and for these reason they always are worshippable. Cows are the support of all the worlds for by their milk they nourish terrestrials beings and by their ghee offered in sacrifice they nourish the denziens of the celestial realms. Nothing superior to cows.

One should never show disrepect for cows in any way nor should one feel any repugnance towards the urine and dung of a cow because these things are also pure. When cows are grazing or laying down relaxing one should never disturb or annoy them in any way. Cows should never be killed in any type of sacrifice or slaughtered in any way for food as the killing of cows constitutes the most heinous of all sins in existence.

Cows are the foremost of all creatures in all the worlds. It is from cows that the means for sustaining the worlds has established. Cows are auspicious and sacred and the bequeathers of every blessing. Cows benefit humans with milk, yoghurt, cheese, butter and ghee. The Vedas have stated that the milk of a cow is equivalent to ambrosial nectar and that ghee derived from cows milk is the best of all libations poured onto the sacred fires of brahmins.

Cows of various kinds and diverse colors are always worshippable. They are the foremost of all creatures existing in all of creation. Morning and evening one should bow ones head in reverence to cows. One should never show any disregard to cows in any way but should always show them respect. When one awakes in the morning one should always remember cows. Before falling to sleep at night one should always remember cows. Cows are always auspicious. Cows are also fragrant. The wonderful scent of the amytis agallochum emantes from out of their sacred bodies.

Cows are the great refuge of all creatures. Cows constitute the greatest source of blessings for all creatures. Cows are the past. Cows are the future. Cows are the source of evolution and eternal growth. Cows are the root of prosperity. Whatever is given to cows always produces good fortune and is never in vain. It is solely and exclusively from the ghee of cows that the sacred rituals prescribed and authorised in the Vedas are empowered and able to be performed. Without the presence of cows ghee there is no possibiity of performing sacred rituals that will gratify the 33 million demigods who are responsible for universal management. Neither will the Supreme Personality of Godhead, Lord Krishna be pleased and satisfied. Ghee comes exclusively only from cows from whom flow offerings of milk and milk products. Thus cows verily establish the purity of all sacred rituals and constitute the very essence of performing all sacred activities being the very source of sacred activities.

Cows represent sacred acts themselves and without cows there can be no performance of any sacred act. This is the pure, sublime and supremely exalted position and pre-eminence of cows above all creatures in all the worlds. One who knows the pre-eminence of cows and the selfless service cows render to all creatures and does not protect them affectionately is a sinner and offender and their destination is certainly hell. Cows are equal to the rays of the sun that travel through the universe giving light, warmth and nourishment.

In previous yugas the Vedic injunction was given jiyaite pare yadi tabe mare prani veda-purane ache hena ajna vane that means in the Vedic scriptures known as Puranas there are injunctions declaring that one can take the life of a living being only if they are able to revive it back to life again by chanting Vedic mantras. But we find that this injunction has been terminated in todays age of kali yuga by the Brahma-Vaivarta Purana where it is stated that in the present age of kali yuga it is forbidden to kill cows under any circumstances.

Cows are equivalent to our mothers for when the mothers milk has dried up the cow gives her milk unselfishly to noursih and strengthen us. How can one who has ever drunk cows milk justify the killing and eating of such a mother as the sacred cow. One should never even in one’s mind do injury to a cow or ever think of harming cows as well as bulls. One should show all respect and compassion for cows and sincere reverence should be offered unto them all without reservation.

Those who fail to give cows reverence and protection and choose to foolishly oppose and whimsically ignore the injunctions of the Vedic scriptures by selling a cow for slaughter, by killing a cow, by eating cows flesh and by permittings the slaughter of cows will all rot in the darkest regions of hell for as many thousands of years as there are hairs on the body of each cow slain. There is no atonement for the killing of a cow.